On January 1st 2011, the day when Hungary has enforced its disastrous censorship-law, this country has also taken over the Presidency of the EU Council.

This sounds like a huge piss-take! Especially when we consider all these resident-evil projects, like INDECT, ACTA, and other censorship implying plans.

I cannot accept that the heads of our states just keep on acting as ever in their grotesque politics-theatre!
Even if some eu-politicans pass criticism on hungary, there is no real opposition against that upcoming dicatorship.

But the recently implemented censorship is only the tip of the iceberg! So, I’ll give you a brief summary:

I can’t believe it! 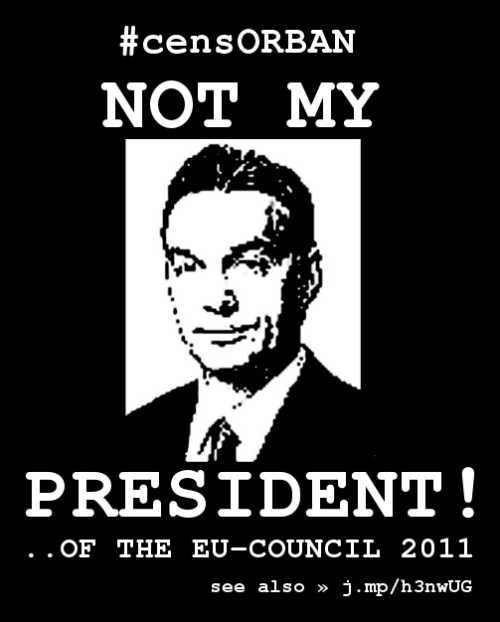 We shouldn’t stay calm now!
Join the protest and raise your voice!

Europe’s bloggers are not going to accept that the EU Council will be presided over by a country acting against the fundamental rights of EU citizens. Such rank hypocrisy cannot go unchallenged. Article 11 of the Charter of Fundamental Rights and Freedoms of the EU is very clear about this:

1. Everyone has the right to freedom of expression. This right shall include freedom to hold opinions and to receive and impart information and ideas without interference by public authority and regardless of frontiers.

2. The freedom and pluralism of the media shall be respected.

We see this right being violated by the upcoming EU Council Presidency and are thus inviting bloggers from all around the EU to join our European Blog Action.

Voice your criticism in your blogs, on Twitter and Facebook – and put the links to your articles into the comments of this post. If you want, you can additionally send your links directly to the press team of the Hungarian Council Presidency – here is their email address: press.beu@kum.hu. And you can also share your links and thoughts on Twitter – we are proposing the hashtag #NoToHuEU.